Home / Articles / HR The Most Useless Assault Rifle in CS:GO. Does the FAMAS Have a Future?

The Most Useless Assault Rifle in CS:GO. Does the FAMAS Have a Future?

The FAMAS has rarely been used in professional games so far this year. Only ~2.3% of all the kills have been with this weapon. By comparison, the Deagle's numbers are ~3.2%, and the CZ-75A has ~5.2%. These dire numbers show that, not only is the weapon not popular, but it isn't efficient, either. So why is that?

The FAMAS is the cheapest automatic rifle at the CT side’s disposal and the second cheapest one in the game. Its price is $2,250, with the closest price for any other gun being $3,100 for the M4A4/M4A1-S. The bargain-bin price allows the defense to buy the FAMAS in every round after winning, or after every lost round in case of the maximum reward.

In both cases, the player who gets the FAMAS and armor, will have no money left to get 'nades or kits. Despite that, the FAMAS is the only available rifle in situations where the CT has an unfavorable economy. Killing with this weapon brings $300 as a reward but doesn't help farming for a better weapon, though. 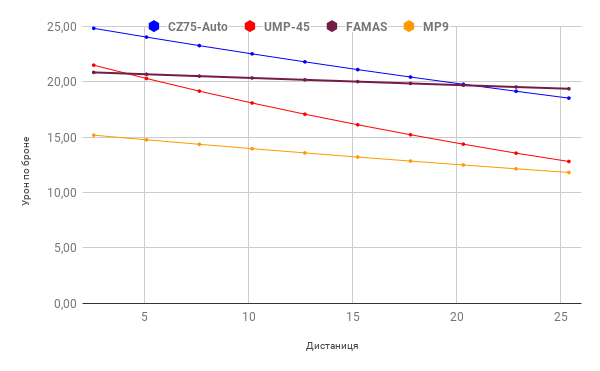 Among the competitors, the FAMAS has a bigger, more expensive brother in the M4A4 rifle and  cheaper SMG's such as the UMP-45 and MP9 as well as the, currently OP, CZ-75A. Considering the fact that the M4A4 is more efficient than the FAMAS, and that it's always preferable to buy the former, let's take a look at the cheaper equivalents.

The FAMAS' damage is better in most cases. Only the CZ-75A can compete with it. Although, the FAMAS also has:

(information is taken from the spreadsheet made by BlackRetina and SlothSquadron)

The FAMAS doesn't even stand out compared to the CZ-75A that is a quarter the price or the assortment of SMG's that are half the price of the assault rifle. However, the rifle does have an advantage when it comes to damage against armor or…

The method of testing: we didn't use any scripts and tried to test this in a way that is as close to the real conditions as possible. To calculate the recoil, we chose a distance of 27 meters or ~1060 units. This is the distance from the white box to the red container on Mid on Mirage, which is where the test took place. We fired tens of single shots from each of the weapons to establish the recoil pattern. All the shots were made while standing still. The server's settings are default with the 128 tickrate

The alternative burst-fire mode. The FAMAS is one of the two weapons in the game that has the option to turn on “burst mode” (the other is the Glock). This mode is faster on paper: 800 shots per minute instead of 666 in its default mode. However, because of the pause between the bursts, the real rate of fire is 327 shots per minute.

Another feature of its burst fire mode is its high accuracy. The lower "cloud" in the picture with the test results is the impact of the first and second shots in the burst, and the upper "cloud" is what the third shot did. In practice, though, the combination of the fire rate and damage nullify a possible benefit of the alternative firing mode. 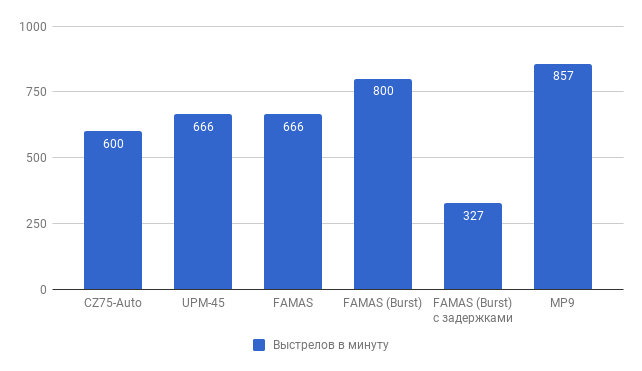 The FAMAS doesn't have other pros besides the burst fire mode and price. The cheap equivalent of the M4 does less damage, has a higher recoil, and the slow reloading time combined with the 25-bullet magazine limit the player to shooting through smokes and long fights.

The competitors, which we have chosen for our comparison, have many more pros. The UMP-45 does more damage against targets without armor; the MP9 is as mobile as a pistol, relatively accurate while jumping and also has a shorter reloading time. The CZ-75A is a quarter the price of the FAMAS and, in no way worse, at a distance up to 10 meters, besides the rate of fire.

Does It Have A Future?

The number of cons and the strong alternatives are what make the FAMAS so unpopular. The low price allows players to buy the FAMAS for a second round in which the firepower of the SMG's isn't enough at a distance. The lack of any other truly strong points results in the FAMAS not having a viable niche use. This rifle should never be bought in a buy round if it's possible to get the M4 which is preferred even without a full set of  'nades or armor without a helmet.